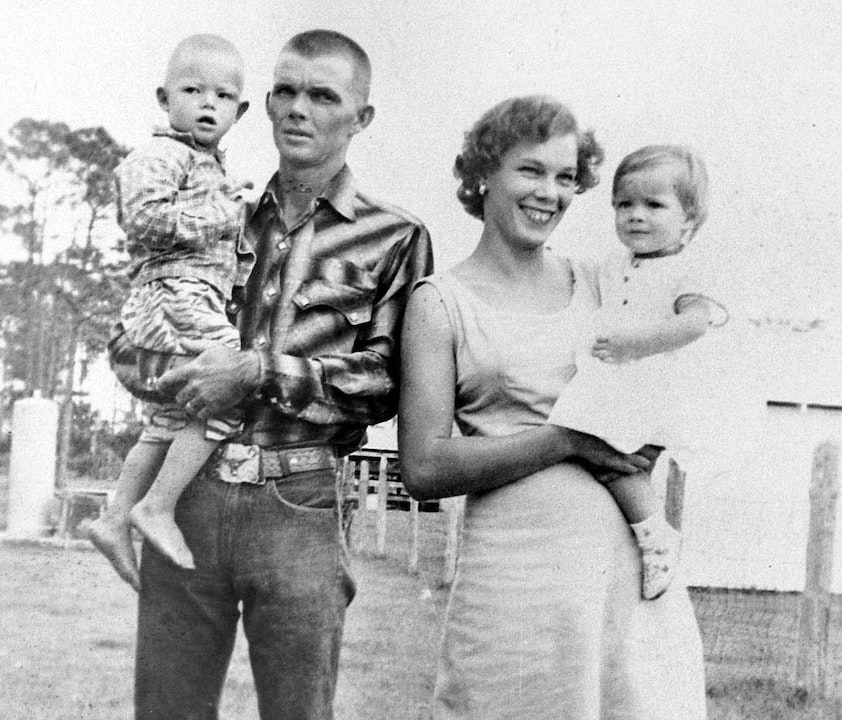 What happened when Christine "Tilly" Walker came home early on December 19, 1959? Who was at the home who would rape and murder her, then wait until her husband got there 30 minutes later and slaughter him and their two young children? Was it all tied...

What happened when Christine "Tilly" Walker came home early on December 19, 1959? Who was at the home who would rape and murder her, then wait until her husband got there 30 minutes later and slaughter him and their two young children? Was it all tied to an infamous case which took place only a month prior? In this very short episode we discuss the details of the murders, police theory, and the possible suspects, who had famously committed the murder of another family in their home.

Hey everybody, and welcome back to Kudzu Killers: Homicide and Sweet Tea. Hope everybody had a great weekend, and we hope you had a chance to listen to the first episode of our brand new paranormal podcast called Two Chicks and a Crucifix. We’ll have another episode out tomorrow, so be sure to check it out. Then two more next week, and after that we’ll be releasing new episodes once a week on Mondays. Check it out, y’all.

What’s up with you Lark?

We went to the Chinese market Sunday and I made out my menu for the week. And I worked. SO very average weekend for me. I’m a cooking maniac since the pandemic.

Well, this week I’m going to go over the Walker family murders. Very sad story, and very upsetting for some as small children were involved. So just a heads up to that. And a very interesting twist to the story at the end. So, that said, let’s get going.

Back in 1959, just before Christmas on December 19th, 24 year old Christine Walker, affectionately known by her family as Tilly, and her husband, Cliff Walker, had a pretty good life. They’d been married about 4 years, and they had two little babies, Jimmy, who was 3, and Debbie, who was 1.

Cliff who was 25, was a ranch hand, and lived in a home on Palmer Ranch in Osprey, Florida, with his wife and children. Both Cliff and Tilly were rodeo enthusiasts, where she did trick roping and he roped calves.

On that day of December 19, Tilly had gone grocery shopping and returned about 4:00pm. Her car wasn’t parked in its usual space, but she’d gone in the house and put away groceries and hung her purse up on a peg. She was known to like the attention of men, she had a great figure and wore flattering, clothes to show it off. People would call her loose and claim she had affairs, but there was no sign of trouble in the marriage, and family and friends said the rumors were untrue. Still, detectives put together a theory that a boyfriend had met her at home, which I find kind of silly since she probably knew her husband was on his way home with the kids. But they think the man took her regular parking spot and she parked in a different spot before inviting him inside. I mean, their theory had some assumptions that were really reaching. They figured the guy was drunk and when he tried to hit on her things got ugly. It appeared she may have been punched in the face, and that she’d fought with him and lost. He then raped her before shooting her twice in the head. She was evidently covered with the bedspread from Jimmie’s bed, which they felt showed signs it was someone who knew her.

Then about a half hour later, Cliff showed up at the house with the kids, and unbeknownst to him the man still waited inside. This in itself may be a telling clue: the killer was comfortable enough to remain at the crime scene and wait for the remainder of the Walker family to return home. Either the Walkers knew his name from an earlier telephone communication, since the Walkers were in the process of selling Christine’s car, or the killer hadn’t enough time to exit the scene without being caught. Most likely the latter is true. Cliff walked through the front porch, opened the French doors and stepped inside, where he was shot. The killer shot Jimmie 3 times, and Debbie once. The killer shot her in the head, but the girl didn’t die. So he took he to the bathroom, where he filled the tub with about 4 inches of water, stuck her head underneath it and drowned her. I mean, they went so far as to say he didn’t shoot her again because he ran out of bullets, which I suppose could be true, but their story read like a true crime story rather than something taken from actual evidence.

The next day, December 20, 1959, Cliff was set to go hog hunting with his coworker and friend, Daniel McCloud. When McCloud pulled up to the Walker house, things were unnaturally quiet. He thought maybe Cliff had overslept, so he got out of the car and went to the front door and knocked. He knocked again loudly. No answer. At that point, he got worried and cut through the screen door to get inside.

Just inside the door, he found Tilly, blood pooled all around her. Raped and shot in the head Over in a corner were Cliff and Jimmie, also both shot in the head. Little Debbie was missing, and he was so shaken he didn’t go looking for here. Instead McCloud left, and went to the nearest place and called police. When they came to search the house, they found Debbie shot and drowned in the tub.

When police searched the house, among the things found missing were the couple’s marriage certificate, which they’d hung proudly on the living room wall, Tilly’s high school majorette costume, and Cliff’s pocket knife. That led police to think the couple probably knew their killer or killers. Initial suspects included McCloud. They always suspect the person who finds the body, I think. And a cousin of Cliff’s who had a bad temper and a reputation for flying off the handle in violent anger. But they were quickly cleared. The case ended up going cold.

Later, there was a confession from convicted serial killer Emmett Monroe Spencer but his story was fabricated according to police, and contained details he’d most likely gotten from crime novels and newspaper clippings. He was known as a pathological liar, so his confession was quickly dismissed. They questioned 587 suspects, and nothing panned out.

So for 50 years that case sat in a box, in a storage place in Sarasota.

Until 2012, when detectives in Sarasota County dug up the files and decided to reopen the case. Two people who had always been considered suspects for the murders were already well known for murdering an entire family, about 1700 miles away in Holcolm, Kansas. That family was the Clutters, which you may remember from Truman Capote’s true crime novel, In Cold Blood. The Clutters were murdered almost exactly one month before the Walkers, and it was known that the killers, Perry Smith and Richard Hickock, had traveled to Florida after the murders. They’d heard that Herbert Clutter kept a lot of money in a safe in his home, and they wanted that money. Turned out that Mr. Clutter didn’t keep much money at home, he wrote checks for spending money and they ended up with only $50. But a little important detail was, Hickock wanted to rape, and was planning to rape, the Clutters’ 16 year old daughter, Nancy. Smith talked him out of it.

Now, back to 2012. They wanted to see if the two men people had felt was responsible for decades were really the killers of the Walker family. The two had been suspects since 1960, but the investigation went nowhere, and they passed polygraphs, I believe, saying they didn’t do it. But the detectives in 2012 petitioned to have the bodies of Perry Smith and Richard Hickock exhumed anyway to test mitochondrial DNA from the bones against the DNA found in Tilly Walker’s underwear. They were allowed to do so, however, the DNA was too degraded to make a comparison of yes or no, so we still don’t know for sure who murdered the Walkers in cold blood.

But here’s what I think. My money is on Smith and Hickock. They were spotted in the area by witnesses right before the murders. And think about it. They knew police were looking for them, and might even have a description of their car, or a license plate. And what I found out is that the Walker had been advertising Tilly’s car for sale. So who’s to say, and this is me speculating just like the police did back then, that these guys didn’t see the for sale sign ad in the paper, or somewhere, and went to the address. When no one was home, they sat there waiting. Maybe Tilly wondered about the strange car, but parked and took her groceries inside, and didn’t see anyone there until it was too late. OR, She had put away the groceries and there was a knock at the door, she opened it thinking it was her husband and children, and it was Smith and Hickock instead, or they even talked their way in somehow. Smith let Hickock have his way with her before murdering her, and when they couldn’t find anything else valuable in the house so they took some mementos, a marriage certificate, uniform, pocket knife, and left. Or they could have stolen the pocket knife off the dead body of Cliff Walker.

At any rate, we probably won’t ever know what happened to them, and that has tortured Tilly’s sister, Vella for almost all of her adult life. She was 4 years younger than Tilly, And they got married in a double ceremony when she was only 16. She was pregnant with her first child when her sister died, and every November and December, when Tilly’s birthday and the date of the murders rolls around, she sinks into dark depression. She was very hopeful things would change after the bodies were exhumed and DNA testing confirmed the guilt of Smith and Hickock, and I’m not sure how she took it when they couldn’t link the DNA, but I think she was pretty sure after the detectives decided to exhume the bodies, that they knew who did it, and she said she’d had a decent Christmas with her children for the first time ever.

So, such a sad story, and parents who would never know what happened to their children and grandchildren. Truman Capote, when he released the novel In Cold Blood in 1966, he said he didn’t believe Smith and Hickock had anything to do with the Walker murders. I think he was wrong. What do you think?

Thanks for listening, and be sure to check out tomorrow’s episode of Two Chicks and a Crucifix, where we’ll be talking Alien Abduction.